Pages primarily about my research and academic practices more broadly 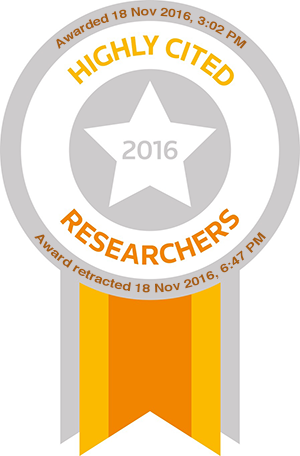 “Dear Claes-Fredrik,” Last Friday afternoon I was notified in an email from Thomson Reuters that I had been awarded the distinction of being a “Highly Cited Researcher.” I was selected since my work had “been identified as being among the most valuable and significant in the field.” The email further stated that very few earn this distinction and that the process of identifying me involved something called “Essential Science Indicators” and a ranking of the top 1% most cited works for a given subject field.

The award included a downloadable badge for use on my website, LinkedIn profile, and email signature. (Their suggested uses.) The email further provided a link where I could request a physical personalised letter and certificate for display. Finally, the email suggested that I could join the conversation on social media about this award using the hashtag #HighlyCited.

Not bad news for a Friday afternoon when I was desperately crunching tasks so as to not make too many of them reappear on next week’s to-do list. The nice email ended with a really warming sentence in the direct voice of the signer, Vin Caraher:

“I applaud your contributions to the advancement of scientific discovery and innovation and wish you continued success.”

Yet, what Thomson Reuters can give, it can as easily take away. Three and half hours laters I received a second mail from Thomson Reuters. This time it was not addressed to me personally, but to “Dear Researcher” and moreover signed by the more anonymous “Clarivate Analytics” than by Vin Caraher. Anyhow, the gist of the mail was to inform me that the previous mail was sent in error. Here is the full email:

We recently sent you an email about being named a Highly Cited Researcher. This was sent in error. Please accept our sincere apologies.

We’ve identified the error in our system that caused this and were able to resolve it quickly, ensuring it won’t be repeated.

Highly Cited Researchers derive from papers that are defined as those in the top 1% by citations for their field and publication year in the Web of Science. As leaders in the field of bibliometrics we appreciate the effort required to reach this achievement and celebrate those who have done so this year.

No mention of downloadable badges, personalised certificates, or indeed if I should join (or refrain from joining) the conversation on social media. Furthermore, the final paragraph is a bit hurtful since it really underlines the need to celebrate those who truly are “Highly Cited Researchers”. All of us, now anonymous recipients, of this retraction email are not belonging to this category. Ouch! A quick search online further indicated that I was not alone in having received this award, only to have it retracted a few hours later.

What to think and what to do about this small incident? To me this underlines how academia is completely submerged in a variety of valuation practices. (Not surprising given my interests.) This particular assessment is also interesting since it is performed by a firm who have taken it upon itself to annually perform this assessment as a kind of service to the scholarly community. Another example of a private entity performing such assessments in the area of higher education is the ranking of U.S. law schools done by U.S. News and World Report (as studied in the book Engines of Anxiety by Wendy Espeland and Michael Sauder). The incident also reminds that it is interesting to examine not only how assessments are made, but how it is to be an object of assessment. (Valuation Studies will in a few weeks publish an article by Henrik Fürst where he examines how aspiring authors deal with rejection letters.) There is, finally, this theme with valuations going wrong. A blog post at the site Retraction Watch about this incident further noted that the previous highly cited list had included a scholar who since then had 18 retractions to his name. I’ve received an apology and there are apologies circulating on twitter. Yet, one can but wonder how else Thomson Reuters and the like take responsibility when their assessments go wrong. What if I had bought (and consumed) a bottle of champagne to celebrate “my award”?

What to do? I decided to keep the badge, only with a slight modification to indicate that I only was a proud holder of the award for a few hours.